Last year, one of my clients asked me this question. He was well-educated, but had simply never had an occasion to learn how investments work. It struck me at that moment that if he didn’t know, then plenty of other people probably don’t, so I decided to prepare a short introduction to the topic.

Simple questions don’t always have simple answers, and a complete answer to this question would not be simple. But here is a simple description of the basic difference between stocks and bonds:

If you own a stock, you are one of the owners of the business

Creating wealth is a long process, but it begins with one easy step. Before paying any bills, write yourself a check for as little as $25. If you do only one thing, this is more likely to make you wealthy than anything else. Paying yourself first is popular advice because it’s the most important step to becoming financially independent.

This is very powerful, but it’s often overlooked because it’s so simple. Most people save whatever is leftover each month but this never works. Rarely is there anything left to save after paying the bills. It’s human nature to spend whatever …

What do FedEx, General Motors, Frontier Airlines, Eastman Kodak, Motorola, Sears and Unisys all have in common? All have announced plans to cut costs by suspending their matching contributions to employee 401(k) plans. Even Starbucks has announced that it may drop its 401(k) match in 2009.

Employee benefits firm Watson Wyatt Worldwide reported the results of a survey that asked companies about plans for a variety of cost-cutting moves.  3% reported that they had reduced their defined-contribution match as of last month, while 7% reported plans to do so this year. Emily Brandon, at the Planning to Retire Blog, … 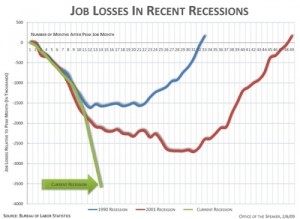 It’s now agreed that our nation is in a recession. With increasing frequency, recent media discussions about the economy have turned to the question of whether it will turn into a depression. What’s the difference?

The definition of conditions that constitute a recession is sometimes debated; as economist Jeff Frankels (who is a member of the committee that officially proclaims US recessions) admits, it can be hard to get all the data to …

It’s too early to say with certainty what changes will be made in the tax laws this year. But it’s possible to make some educated guesses.

If the present economic malaise does not extend past 2009, chances are good that tax rate increases will be enacted for the highest tax brackets in 2010. Instead of topping out at the current 35%, the top income tax rate could return to 39.6%, …