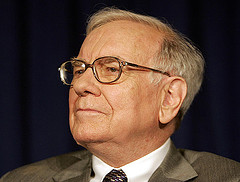 Legendary investor Warren Buffett has made an interesting wager with the management of a New York hedge fund. Buffett is betting that over the course of ten years, the hedge fund won’t be able to outperform a passive S&P 500 index fund after fees are considered.

The bet – each side is putting up $320,000, to be held by a third party and invested in a zero-coupon Treasury bond for ten years – is Buffett’s way of ridiculing the high fees charged by hedge funds.  Protégé Partners, the other party in the wager, runs a fund of hedge funds.  That’s not a typo.  Hedge funds use a wide range of strategies to generate investment returns, so it isn’t unusual for investment managers to create “funds of funds” – investment funds made up of multiple hedge funds chosen by the manager.  Fortune magazine editor Carol Loomis reports that Protégé’s performance in the bet will be based on the performance of five funds of funds managed by Protégé .  Each year, at the annual meeting of Berkshire Hathaway, where Buffett is CEO, the standing of the two sides will be announced.  To avoid upsetting the SEC, which forbids hedge funds from being marketed to unqualified investors, the identity of the funds will not be publicized.

The winner gets to name the charity to which the loser must pay his proceeds.  For Buffett, the wager is really just about having a bit of fun; after all, he has so much money that $320K amounts to little more than a rounding error in his net worth.

Buffet’s proxy will be the Vanguard S&P 500 Admiral shares class, which has a tiny fee of 0.07%.  The Protégé funds carry a 1.5% management fee, plus the managers get 20% of any investment gains.  In addition, as a manager of a fund of funds, Protégé gets its own cut of a 1% management fee plus 5% of the investment gains left over after the hedge fund has gotten its share.  The upshot of all these fees is that the Protégé fund of funds gets charged 2.5% plus the investor retains, at most, 76% of the gains accomplished by the managers.

Protégé’s main fund, Protégé Partners LP, started in July 2002; its net performance through the end of 2007 was a gain of 95%, after fees, vs. the Vanguard fund’s gain of 64%.  However, the bet pertains to the average of five funds of funds, so the net performance for Protégé should be a blended return, sort of like a hedge fund index.  Each fund of funds only contributes 20% to the overall performance.  Big winners (or losers) will have a fair effect, but not an overwhelming one.  The strength of a good hedge fund is that it shouldn’t lose as much money as the broad stock market if there’s a down year.  Of course, once in a while, a hedge funds completely tanks.

As I’ve shown elsewhere, fees can have a significant impact on the net performance of an investment. I began wondering yesterday afternoon just how well Protégé would need to do to win the bet.  A bit of number-crunching indicates that if, for example, the S&P goes up at a ten-year annualized rate of 8% before fees, Protégé would need to achieve 14.2% annualized (also before fees) to have the same performance net of fees.

What will actually happen, of course, is that there will be up years and down years for both sides.  Buffett estimates his chances of winning after ten years at 60%.  If hedge funds continue to proliferate, the funds will all be chasing gains from the same sources and mutually diluting each other’s returns.  Barring a string of bad years for the S&P 500, I think Buffett just might win.  In any event, the wager will add to the entertainment value of Berkshire Hathaway’s already-popular annual meeting.