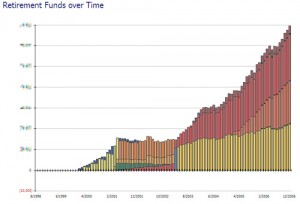 Many employer-sponsored tax-deferred retirement plans, including 401(k)s, offer a unique investment option called a “stable value” fund. If you’ve invested in such a fund, you should take a close look at what’s inside – its value might not be as stable as you think.

For years, I’ve had some of the money in a 401(k) plan with my former employer invested in something called the “fixed income fund.” The fund documents describe it as a conservative cash-like investment with a $1.00/share price.  Over the years, the fund has always yielded more than a money market fund; its current yield is about 3.4%. I have to confess that before I started reading David Merkel’s alephblog (see below), I didn’t pay much attention to how the fund was invested.  I did know that at one time, this type of fund invested something called a “guaranteed insurance contract,” but beyond that I never gave it much thought.  After all, what could be safer than an investment with both “guaranteed” and “insurance” in its name?

When I began participating in my company’s 401(k) plan, these funds bought AAA-rated guaranteed insurance contracts (GICs) from insurance companies; the contracts paid out interest at attractive rates.  Over time, though, insurance companies weren’t willing to write enough of these contracts to meet the demand for funds, so stable value fund managers began buying highly-rated structured products too – things like mortgage-backed securities and similar securities with maturities of roughly 2-3 years.

As David Merkel explains in his helpful introduction to stable value funds, GICs were carried at book value rather than market value.  This permitted the funds to maintain a stable share value.  Since the contracts were intermediate-term investments, they carried higher interest rates than money market funds, which are very short-term investments.

A wrap agreement contract also provides that if (for example) the contract provider has to make a payment because of a bond liquidation, a compensating agreement is made in which the stable value fund pays back to the provider a stream of payments over the remaining duration of the bond that was sold.  If instead the liquidation of a bond results in a payment going to the wrap agreement provider, the opposite happens:  the wrap agreement provider pays money back to the stable value fund over the remaining life of the bond.  The point of all these transactions is to enable the fund to handle redemptions that may occur when there’s not enough cash on hand.

The problem with stable-value funds
This all works nicely enough when new money is flowing in steadily.  However, problems can arise if there are too many redemptions at the same time.

At any moment in time, the total market value of the bonds held by a fund can be more or less than the book value; it’s only the wrap agreements that allow a stable value fund to maintain a $1.00 share price.  If large amounts of money start flowing out of a stable value fund all at once, the manager must sell some bonds and the wrap contract writer pays out the difference.  The fund must now repay the wrap agreement writer, but where does that money come from?  It comes from the income generated by the remaining securities in the stable value fund, so the fund’s yield payout must drop.

What if a stable value fund is liquidated (closed)? In that case, there is no money left in the fund, and nothing with which to make a countervailing repayment to the wrap agreement writers, so they aren’t going to make up the difference between market value and book value.  In this case, if the market value of a stable value fund is less than its book value, the fund investors will probably receive less than one dollar per share (unless the fund custodian decides to make up the difference).  For example, Chrysler employees and retirees who owned shares of Chrysler Stable Value Fund B received 89 cents on the dollar when the fund was liquidated earlier this year.

I’m indebted to David Merkel’s writing on this, which forced me to look more closely at the potential risks of these funds.  David has been explaining the risks of stable value funds for some years, but especially in the last month he’s argued rather vocally that some stable-value funds are likely to “break the buck” this year.  A couple of days after reading this post, I received an article in Employer Benefit Advisor bearing the news that as much as 10% of the wrap agreement contracts in the stable value fund marketplace have been written by – gulp – AIG.  Since AIG is currently a ward of the state, that might mean that everything is fine, but I’m not sure we can assume that AIG’s contracts will be backed by the government’s full faith and credit.

What I did/What you should do
All this prompted me to start making some inquires about the stable-value fund offered by Vanguard in my former employer’s 401(k) plan.  I learned that at the end of September 2008, its stable value fund had a market value/book value ratio of 98.54%, which is not too bad.  At the end of October the ratio had dropped to 96.81% but it increased to 99.46% by year-end. The fund is crediting its AIG wrap contract at 0%, and that’s the main reason that the ratio was under 100%.  There’s some nice fine print in the fund’s quarterly statement affirming that “the occurrence of an event or condition which is outside the normal operation of the plan (e.g., layoffs, plant amendments, sale of a division, participant withdrawals due to plan sponsor’s insolvency or bankruptcy) could cause participant benefits to be paid at less than book value.” As it happens, my former employer has been acquired by another company.  That definitely sounds like an event or condition outside the normal operation of the plan, so it will be interesting to see what’s actually paid out by this $500 million stable value fund when it’s liquidated later this year.

Vanguard is pretty conservative with its stable value funds, but the fact that even Vanguard has about 10% of its wrap agreements with AIG gives one pause.  The Barron’s article cited above quotes a consultant who estimates that one quarter of the stable value fund industry’s assets have a market value below 90% of book value.  In the best-case scenario, none of these funds will have large redemptions, but events over the last year have made most of us pay closer attention to the worst-case scenarios.

Since last September, a lot of money has moved into stable value funds as investors fled the stock market for safer ground.  For the most part, stable value funds are safer than stock funds, but there is a degree of risk in these funds.  They’re not as safe as Treasuries, for example, or as safe as a money market fund with a Treasury guarantee (but keep in mind that the Treasury’s guarantee only applies to money market funds owned prior to Sept. 19th of last year – new money moving in to money market accounts does not generally receive the Treasury guarantee).

Even if your stable value fund is not as aggressive as the aforementioned ING Group funds, the possibility exists that its market value/book value ratio is significantly less than 100%.  If you can’t tolerate a loss in the money you have invested in a stable value fund, you may have other options.

In practice, though, stable value funds often make it difficult for investors to pull money out rapidly (for obvious reasons).  These barriers reduce the likelihood that your fund will experience a large outflow that reduces the remaining market value.  For example, in my 401(k), I can move money between the stable value fund and the equity fund options, but I’m not permitted to move money from the stable value fund to a bond fund or money market fund. This reduces the chances of a “run” on the fund, since the only place that stable value fund money can go into is riskier options.  But those restraints provide no protection in the event of a fund liquidation.

Retirement plan sponsors do not make it easy for you to find out the market value/book value ratio for your plan’s stable value fund. You’ll need to ask, and you’re probably better off asking in writing.  Retirement plans are obliged to provide this information to plan participants, but the information you get may be three or more months old.  Vanguard offers a nice secure e-mail option for its retirement plans, so I was able to get the information I needed that way.