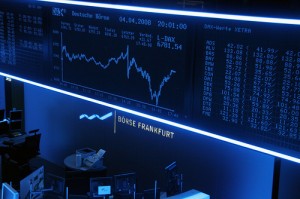 The Hewitt data are by no means comprehensive, as there are over 50 million 401(k) plan participants in the country, but theirs is one of the few surveys that tracks 401(k) investment behavior in the recent past – the most comprehensive retirement plan data are often more than a year old.  Hewitt’s index is interesting because it can reveal recent trends.  In January, Hewitt noted a general move away from equity investments, with inflows into stable-value and bond funds totalling $60 million and $40 million, respectively.  That much isn’t surprising, as investors often flee the stock market after it’s fallen.  What’s interesting is that despite the general move out of equities, the largest inflow of funds, $65 million, was into company stock funds.

It may be that this is just some sort of anomaly. But I can imagine that a lot of people might have looked at their company’s stock price and said, “it’s never been this low before; now must be a good time to buy company stock.” This might have been a good decision for some people; it depends on their individual circumstances and whether they already owned a lot of company stock.

The problem with investing large chunks of one’s retirement funds into employer stock (as former employees of Enron, Worldcom, and Lehman Brothers have learned the hard way) is that your regular income is already dependent on your employer’s success.  If too much of your financial success hinges on your employer, you stand to lose a great deal if an unforeseen event causes a downturn in your company’s stock price, and even more if the company goes bankrupt.

Employees tend to believe that they know a lot about their employer’s chances of success.  If a company’s management is particularly foolish or inept and the public hasn’t figured that out yet, an employee often does know more about his company’s prospects than the investing public.  But too frequently, employees err in the opposite direction: they tend to be too optimistic about their company’s chances of success, and they invest too heavily in company stock.

There’s no hard and fast rule about how much company stock you should own.  An executive with diverse assets could have 50% of net worth in company stock if he or she is willing to risk losing that much.  Losing half your assets is painful, but if you began with a net worth of $10 million, you can still retire.  But if you’re counting on your 401(k) plan as a major future source of your retirement income, most advisers would caution against having more than 5-10% of your retirement funds in company stock.  An exception to this limit might exist if you own investments that can hedge against a stock price decline (e.g. a stock option that goes up in value if the stock goes down).  In practice, though, this is a complicated strategy that wouldn’t be appropriate for most people.

It’s too early to say whether this blip in company stock-buying is good or bad.  Depending on the details, it could reflect shrewd insight or it could be a sign that investors haven’t learned enough about the dangers of putting too many eggs in their employer’s basket.