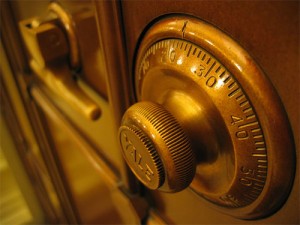 This Monday, something very unusual happened: a money market fund began trading its shares at 97 cents, instead of a dollar. Reserve Primary Money Fund (RPFXX) was forced to write down three quarters of a billion dollars of Lehman Brothers debt as a consequence of the Lehman bankruptcy. Even though the debt may eventually be partially paid through the bankruptcy process, as a current obligation the debt has no value. Thus the fund’s share value had to drop, forcing the fund to “break the buck.” On Monday and Tuesday, investors in the fund pulled out $27 billion in response. FT Alphaville reports that one of Putnam Investments’ institutional money market funds has decided to close and liquidate itself, not because it needs to “break the buck” now, but because of concern that a future run on the fund might force a fire sale of its assets. Money market funds are normally thought of as stable places to put cash, but even money market funds are not guaranteed not to lose money. How can you judge how safe your money market funds are?

This question, posed by a friend of mine today, isn’t necessarily easy to answer.

If you’re invested in a money market mutual fund, you may be able to tell something about its level of safety from the fund’s name:  if the name of the fund contains the word “treasury,” the fund probably invests entirely in obligations of the US government, which are still the safest securities available.  If the name contains the word “federal,” the fund probably invests primarily in US government and US government agency obligations, but it may also invest in other short-term debt.  Don’t rely totally on naming conventions, though; your fund could be invested in one of several different types of short-term debt.

Take a look online at your money market fund’s web site and look for a summary of its portfolio holdings.  The kinds of holdings that you will see, in rough order from safest to riskiest, are: U.S. Treasury securities, U.S. Agency securities, certificates of deposit, bankers acceptances, “Yankees” (CDs issued in the US by a branch of a foreign bank), commercial paper, or “other.”

If your money market fund is holding a lot of commercial paper or “other” – a wild-card category – that doesn’t automatically mean it’s bad, but it does imply a higher potential risk than fund holdings that are exclusively or heavily in CDs and US Government/Agency debt.

It’s difficult to know exactly what your fund is holding at any point in time; the SEC requires quarterly disclosures of mutual fund holdings, but obviously that’s not much help when holdings can be bought or sold at any time.  Going forward from today, I’d bet that every money market fund that’s able to will shift toward lower-risk holdings.

As you might expect, funds that are heavily skewed towards Treasuries have lower yields; expect the yield difference to widen as investors seeking safe haven continue to flock to Treasuries.  If you’ve looked into your fund’s holdings and you’re nervous, here are some things you should consider:

Mutual funds that are part of one of the giant financial services companies or a large bank (except squirrelly ones like Washington Mutual) are likely at less risk.  Prior to this week, no mutual fund had “broken the buck” since 1994, when Community Bankers U.S. Government Money Market Fund got caught by some bad derivatives investments.  But it’s not unusual for a money market fund to have an investment go sour.  Most of the time, the firm running the fund covers such losses out of its own pocket rather than face the shame of taking the price below $1.  Reserve apparently didn’t have the resources to do that.

Check with your fund
Some firms are making a point of disclosing the nature of their current holdings in an effort to show that their money market holdings are not risky.  You may be able to reassure yourself this way.

Trade yield for safety
You can switch to a fund that has all or mostly Treasuries in its holdings.  The yield will be lower, but if you’re worried, the price is worth it.  The financial crisis we’ve been going through can’t last indefinitely.

Spread your money around
You can diversify your money market holdings across different fund families.  This is especially a good idea if you have a lot of money in cash.

Head for cover
If you’re absolutely spooked, put all your money in FDIC-insured short-term CDs or Treasury notes until some sanity returns to the markets.

Postscript added Friday, Sept. 19th: The Federal Reserve has announced that it will provide loans to banks to help maintain liquidity for money market fund redemptions.  Bloomberg.com reported that money market fund investors pulled a record $89.2 billion out of their accounts on Wednesday.  The Treasury has announced that for the next year, it is establishing a guaranty fund for public money market mutual funds willing to pay a fee to participate.  These moves should help considerably.  If investors are not worried about funds going below $1, they’re much less likely to make panic-driven withdrawals.  This should give the money market funds time to dispose of their “weak” assets in an orderly manner.

Postscript added Sept. 24th: In response to complaints from commercial banks, the Treasury department has amended the plan to apply only to investments made before September 19th.

Postscript added 3-3-09: The current termination date for the money market fund guaranty program is April 30, 2009. The Secretary of the Treasury may extend the program to September 18, 2009.