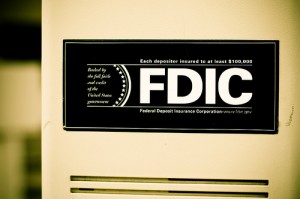 Most people understand that the FDIC insures certain kinds of bank deposits, like bank CDs. There’s no way to “guarantee” an investment against losses, but an FDIC-insured deposit is probably the closest most of us will ever come to a guaranteed investment. However, consumers are sometimes a bit confused about how much FDIC insurance coverage they can have.

The current FDIC insurance limit is $100,000, so it’s not so common that a household would need to worry about having enough coverage.  But sometimes people have unusual liquidity needs, or lots of money, or they’re just very conservative and want to keep a sizeable amount of money in cash.  Many people believe that the limit is $100,000 per account at a given bank, so if they have more than $100,000, they start opening accounts at multiple banks.  Actually, the rules are a bit more complicated than that, and it’s often not necessary to split the funds up among several banks.

It’s correct that the basic coverage for an individual account is $100,000.  But a depositor can have a further $100,000 coverage on a joint account at the same bank.  A depositor can also have $250,000 more coverage on certain kinds of retirement accounts.  Trust accounts are yet another category that can provide a depositor with additional coverage at the same bank.  So, for example, the wife in a retired couple might have a $250,000 bank IRA, an individual $100,000 CD, and a joint account with her husband of $200,000, while her husband also has a CD in his name for $100,000.  Together they would be insured by the FDIC for a total of $650,000 even if their accounts are all at the same FDIC-insured institution.  Keeping all these funds at one bank would be much simpler than spreading the accounts across several banks. The couple could conceivably have even more insured coverage using qualified revocable trusts.

Since this can all get a little confusing, the FDIC offers a handy calculator that lets consumers determine the amount of FDIC insurance coverage provided for their accounts.