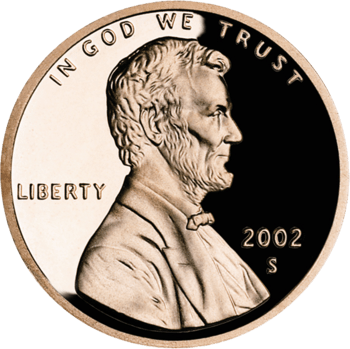 I have two daughters and it has given me the pleasure of seeing them grow up and get excited about even the little things like chasing butterflies or finding a lucky penny. My kids find lucky pennies all the time. In fact, they find lucky coins all over the place. Some are by chance as we’re walking down the sidewalk and other times it’s a lucky coin that I may place in an inconspicuous place so they stumble upon it and find it (sometimes it’s fun creating luck for my kids). Whether they find the coin by luck or otherwise, it gives me a great opportunity to teach them. After the excitement of the find goes away, they get even more excited when I ask, “Where should we put that lucky coin?” With glee they almost always reply, “In the piggy bank!” I feel parents can teach their kids about money even if it’s starting with something as small as a penny. From lucky coins to birthday money it’s OK to teach your kids about saving a little bit, giving a little bit and spending some as well. I don’t think there’s too-young an age to start doing this. And by starting early, your kids will get excited about saving and this can potentially be less burdensome if they were to try at say – age 21. Some readers may question how they can teach their kids about money or even feel that they can’t be effective teachers since they may not be as financially stable or literate as they would like. They needn’t worry. It’s an excellent way for parents to learn with their kids and they can both enjoy the benefits of working together. Parents can learn and then teach by example and simultaneously  show their kids how to save. As kids grow up, parents can then teach them how to save from the piggy bank to the savings account and even investments such as stocks, bonds and IRAs. Having been taught the basic fundamentals of just saving and not spending all their money, kids can learn the value of investing, and the miracle of compound interest. Finally, teaching your kids about money ultimately empowers them to control their money, and not have their money control them. They’ll grow up seeing money as a tool, as a currency, and as an asset they can accomplish great things with – not as a conundrum, enigma, or something to worry or argue about – or worse, something they fear.   Post originally appeared as It’s Never Too Early to Teach Your Kids About Money on Getting Your Financial Ducks In A Row The post It’s Never Too Early to Teach Your Kids About Money appeared first on Getting Your Financial Ducks In A Row.