Each year, stock owners receive requests to vote on a variety of corporate matters, but very few people have the expertise to make an educated election. Owning mutual funds and exchange-traded funds (ETFs) makes the process a bit easier because these fund management companies vote on your behalf.

You know it’s proxy season when your mailbox or email inbox (if you’ve switched to electronic delivery) begins to fill up with proxy voting materials and information about shareholder meetings. Because most investors skip the annual shareholder meeting, votes are typically received online or in the mail through the proxy process, if at all.

Our firm prefers to keep the power to vote corporate ballots in the hands of our clients. We do this primarily because our clients represent a wide diversity of interests and passions, and it would be impossible to represent all of them accurately on corporate environmental, financial, or social issues.

Additionally, many layers of bureaucratic procedures are required for those money managers who do vote proxies, and we prefer to avoid this hassle. Most advisors share our decision to avoid making unilateral voting decisions. And although we are happy to discuss these proxy decisions with our clients, the reality is that most individual investors ignore proxy voting requests.

Shareholder ballots typically begin a list of names you’ve never heard of who are being recommended for election (often reelection) to the board of directors. If you have time, you can read an interesting online bio on each one of these individuals, but don’t expect to find any clues on whether this nominee also happens to be a good golfing buddy of the former CEO.

We generally suggest that if you believe in a company enough to holds its stock, you should typically support the management’s recommendations. But sometimes, I vote “no” or “withhold” on one director’s name just to send a message to management that I am not blindly agreeing with their recommendations, even though my methodology is random at best.

The following election ballot is from The Wendy's Company (WEN): 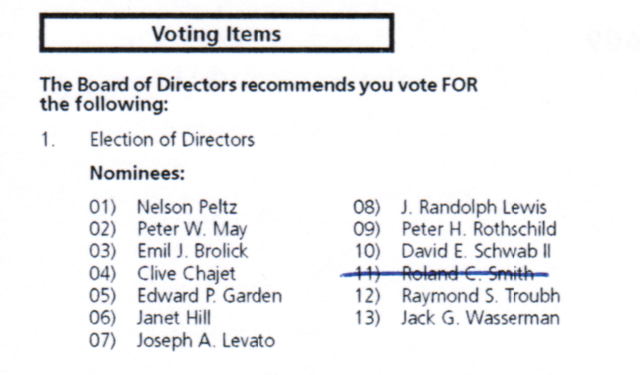 You are also typically asked to approve the financial records auditor, which shareholders rarely contest. Most have no reason to believe that Deloitte will do any better than Ernst & Young or any other of the Big Four audit firms.

The final section is a list of proposals submitted either by the management or by the shareholders. These issues are often quite complicated. In years past, the major thrust of shareholder proposals focused on environmental and social issues. More recently, these resolutions include a focus on executive compensation or corporate political contributions.

Companies are now required to have their compensation reviewed by shareholders at least once every three years. John Bogle, founder of Vanguard Funds, asserts that executive compensation in recent years has “gotten totally out of hand.” In his recent book, Clash of Cultures, Bogle shares that the median pay for the 100 highest paid CEOs is now 320 times the average Americans salary. This compares to a ratio of 42:1 in 1980. But these issues are complex because you don’t want to vote against an executive compensation package that fairly shares the benefits of high productivity among shareholders and management.

Owning stocks through mutual funds and ETFs has a big advantage because by purchasing the fund, you are casting your votes with the other shareholders. If, for example, you own 100 shares of GE stock, you get 100 votes among over 10 billion other shares, which is only a small drop in the bucket. However, if a mutual fund collectively owns 1 billion shares, the fund will vote these shares as one powerful block.

However, not all funds appear to be handling this responsibility as well as others. A recent study completed by a union of state and local government workers looked at the influence of mutual funds on executive compensation. The study dubbed Vanguard, Blackrock, ING, and Lord Abbett as “pay enablers” because they most consistently voted with management for executive pay increases. On the other side, Dimensional, Dreyfus, Oppenheimer, and Wells Fargo were the fund families most likely to vote to rein in pay. For those who are interested in how their funds vote, a nonprofit called ProxyDemocracy publicizes these elections on the web and ranks them against all other funds in corporate governance.

I expect that as investors and money managers begin to express greater interest in fund voting records, these companies will begin to expend more resources in corporate governance. Not only will this movement help to protect more of the wealth creation from being sucked dry by overreaching executives, we can expect that it will also leave us with a more ethical form of capitalism.