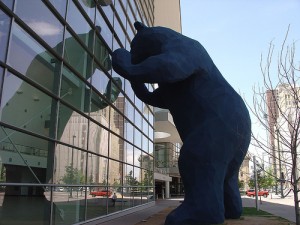 Wall Street is licking its wounds this weekend, no doubt, after being pretty badly clawed by what is almost certainly a bear market. In the coming days you’ll see all sorts of articles offering you free advice, e.g. identifying “Bear Market Stocks You Should Buy Now,” providing lists of the mutual funds into which you should put all your money, and so forth. What should you do?

First of all, if I may borrow a phrase from the Hitchiker’s Guide to the Galaxy, “Don’t panic.” If you’re an investor, you should already have expected that the markets could drop, because it happens all the time.  After the late unpleasantness in March, courtesy of the other Bear (Stearns), there was the eternal-springing hope that the recovery would last; going back only five months before that, stocks were riding high.  After yesterday, the Dow Jones Industrial Average is 19.9% below its October peak; the traditional definition of a bear market is 20%, but at this point no one is splitting hairs.

Since I’m chronically behind in my reading, I’ve only just begun to read a book that has great relevance right now: Jason Zwieg’s “Your Money and Your Brain.” Zweig, a writer for Money magazine who will soon take over the personal finance column vacated by the estimable Jonathan Clements, has been speaking and writing for some time about behavioral finance and neuroeconomics.  This is relevant because after the last few weeks, most of us are likely to be suffering from a phenomenon that psychologists call “recency;” this appears to have a physiological basis in the brain’s chemical response to unpredictable events.  Recency is a tendency to estimate the probability of an event on the basis of our most recent experiences, rather than on the basis of our long-term experience.  Having seen the market tank, now we can only imagine it spiraling down, down, down.

To be sure, the economy is looking dodgy, and the stock market tends to bottom out before the economy does.  Financial markets are volatile.  The potential for significant investment returns requires taking risks; low-risk investments like money market funds have no chance of keeping up with inflation over the long-term.  The market could indeed go down some more, but long-term experience says that it should bottom out eventually.

Ideally, your portfolio should be configured so that when the markets go down, you don’t have such a large risk exposure that you’re tempted to sell everything.  If you’re exposed to more risk than you can bear, it’s only a matter of time before a market drop incites a tremendous urge to sell all your stocks and buy CDs.  If you give in to that urge, you’ve sold low after buying high.  Ouch.

If you’re investing for a long-term goal, your portfolio should be tailored to meet your goal.  A proper portfolio, in addition to being diversified among different asset classes, should have a mix of risky and low-risk investments that also fits your personal ability to tolerate portfolio declines.  When the stock market is tanking, we’re tempted to forget that our portfolio is invested for the long-term.  You need a return that exceeds the rate of inflation, so having a portfolio that makes drops that you can stomach is essential.  Unless you’re convinced that the entire global economy is going to collapse, you should be a long-term investor.  If you are certain that total economic collapse is imminent, there may still be some ex-Y2K-crash believers around who’ll give you a good deal on a flour mill.

I do think it’s wise to be prepared for further drops in the stock market, and for an economic downturn.  Be sure that your financial house is in great shape. Get your spending under control, because increases in the cost of necessities like food and energy are likely.  Avoid unnecessary debt, because your job security probably isn’t as strong as it was a year ago.  If you haven’t rebalanced your investment portfolio in the last year, now is a good time to do so.  Rebalancing requires doing something counterintuitive: selling some holdings in asset classes that have gone up significantly (emerging markets, for instance) and increasing holdings in others that have been in a funk (a long list, but REITs come to mind).  Rebalancing forces you to buy low, sell high over the long term as asset classes oscillate between being overvalued and undervalued.

Having warned against panic that causes you to sell everything, I should also caution against the aforementioned articles that purport to tell you what to buy now; these are likely to appear in abundance.  Making mutual fund purchases based on magazine lists usually results in a jumbled portfolio that has lots of overlapping stock positions and no strategy.  As for buying “bear market stocks” – one of the things on my to-do list is a post on why most people aren’t suited for investing in individual stocks, but that will have to wait for another day.  Suffice it to say that typically these articles tell you to buy, but don’t tell you when to sell.  You need a strategy for doing both.  If the stocks don’t pan out you’ll be stuck watching them drop without knowing what to do.  If they do go up you’ll still need to figure out when to take your profits; most people aren’t capable of doing that at the right time.  Unless you’ve educated yourself substantially about investing, so that you know how to develop a sell strategy, plug your ears to the Siren song of the financial magazines.

If I may borrow from an old joke: To make a small fortune in investments, start with a large fortune, then buy and sell frequently on the basis of stuff you read in magazines.  If instead your goal is to end up with investment gains over the long-term, develop a portfolio based on a coherent strategy that fits your personal risk tolerances, monitor it infrequently (no more than every six months) and resist the urge to make radical adjustments based on short-term market volatility.