S&P downgraded the US long-term debt last Friday. Stock markets have sold off world wide in response, and investors scrambled to buy the freshly downgraded US treasuries.

The stock market response is natural. The downgrade increases uncertainty, which normally causes investors to dump more volatile assets in favor less volatile ones. When the shock wears off, this process normally reverses.

The demand for treasuries makes some kind of sense. According to a friend of mine, the US is 'the best horse in the glue factory.' This is mostly due to the size of the treasury market. Large investors, for example China, have very few other options because they need to invest hundreds of billions of dollars. Even for smaller investors it is often easier to buy a US treasury than, say, a Finnish government bond because the treasury market is so much more liquid.

Credit markets have a history of ignoring the rating agencies. Often the markets sell off a security well before it gets downgraded. Judging by prices, the downgrade has made US treasuries more attractive. It remains to be seen if the credit markets really disagree with S&P's assessment, or whether this is a short-term reaction to the news of the downgrade.

There have been many prominent voices that disagree with S&P's downgrade. We can safely assume that the political class would say that no matter what, but even Buffett blasts the rating cut.

We beg to differ.

While one can argue about the timing and maybe about the details of the S&P's calculations, our current Debt to GDP ratio simply doesn't justify an AAA rating. The chart below shows the Debt to GDP ratios for all AAA rated countries (except two tiny ones: Lichtenstein, and Isle of Man) as of 2010. 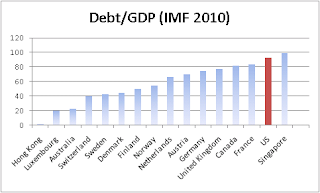 Even based on 2010 numbers, the US was on the high end of indebtedness. The situation has since deteriorated significantly to push the Debt to GDP ratio up to 100%.

The US can always print more dollars. As long as Washington is willing, there is no real risk of default in the sense of not making payments. The default will occur slowly via devaluing the dollar and internal inflation. Both of these are bad for long-term bond holders. The rating cut simply made this well know fact official.

It is likely that markets will experience big swings driven by assessments ranging from 'this didn't changed anything' to 'there is no place left to hide!' However, the medium-term impact is likely to be small. At most borrowing costs will increase modestly, but US businesses don't care because they sit on a record pile of cash, and US consumers don't care because they are held back by an unwillingness (and maybe inability) to borrow, not by the interest rates.

It was clear that the downgrade would roil the markets, but hopefully this downgrade will also focus Washington on solving our long-term debt problem in a constructive and equitable manner.